Skip to content
Just got the sneak release of the Rokinon 35mm T1.5 Cine lens from B & H — Wow.  Very impressed with it out of the box. 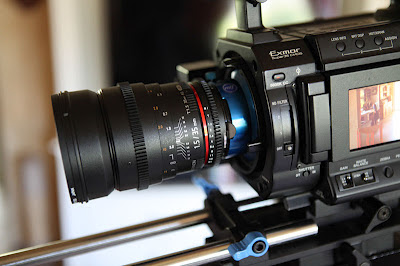 I’m going to be using it on my F3 so the build quality needs to be OK and lets face it… It has to look a little impressive besides being sharp.  I did a lot of research on the Bower, Samyang, Rokinon brands (they are all the same manufacturer) and thanks to information found on KenRockwell.com site and a few other sites these lenses seem really sharp in comparison to their Nikkor counterparts.  I thought I would give them a try and report back.  They aren’t supposed to be out until September but a few got released early and I was able to get one.  I’m waiting for the 24mm, 50mm and 85mm.
Build quality is very nice at first blush.  Not all plasticy.  The witness marks are on the left side only.  Barrel rotation is about 180 degrees and smooth.  Aperture rotation is smooth as well.  Image looks nice and sharp on the first tests.  Bokeh is creamy.  It is a full frame or FX lens so compared to my 5D2 where it’s a 35mm it’s more like a 50mm field of view on the F3.

All in all a nice lens so far.  More to follow…