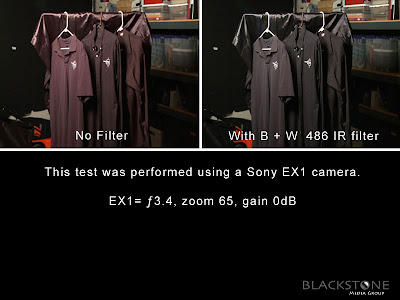 Defining the problem
If you have used the Sony EX1 or EX3 in a setting with black or gray fabrics you may have seen a magenta shift in the picture. One little catch with the new Exmore sensors is they have a big sensitivity toward the Infra Red (IR) spectrum. We did a bit of testing here and found a good workaround with some screw-on IR filters.

As you can see in the pictures the uncorrected shirts have pretty a good magenta shift. The set is lit with one Diva 400 at 3200k. We found in interview settings under either 3200k or 5600k the shift still happens. We talked to a few filter manufacturers and narrowed it down to Tiffen and Schneider. Both had nice offerings for IR filters. Tiffen has their series call Hot Mirrors and Schneider suggests the 77E IR cut (486). We found that the 77E (486) worked the best on both our EX1’s and then the EX3’s. So far we have not noticed a need for the IR filters on our Sony F3. Yay =) Originally the 486 was sold as the best filter for the RED and the Hot Mirrors were the best for the EX cameras but as we tested the opposite was true and that’s why we went with the 77E (486) for our cameras.

Care and Handeling
At first we were putting the filters on when we saw the problem and then removing them after the shoot as they are almost $300 each… After a while we realized the potential to damage the filter when adding or removing it was greater than just replacing our UV filters with the IR filters permanently.

Playing well with others
The filters seem to work well in conjunction with other filters and 4x4s in line. We have had no problems using the IR filters and screwing our Polarizers on in front of the IR.

Best of luck with your filters and lens kits.