I was able to work with a fantastic team to stream the announcement of Motor Trend’s “Car of the Year” award for Alfa Romeo.  This happened during the recent LA Auto Show at the Petersen Auto Museum.  The goal was to deliver the announcement world wide during the show week and present the award to the VIPs of Alfa Romeo.  We streamed to Facebook and Periscope live and then immediately changed out the GFX skin and uploaded to YouTube. 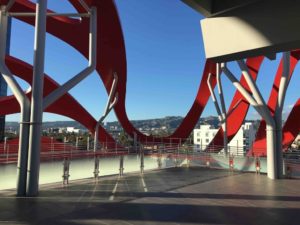 The event was produced by Whitecoat Productions from NY and overseen by their executive producer Zach Stein. They chose the historic Petersen Auto Museum as the venue and the top floor terrace as the setting. 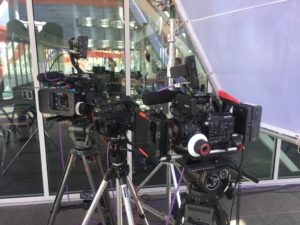 During pre-pro the plan was made to use 3 cameras; one wide CYA, a guest cam and a dedicated tight cam on the host.  We used 2 Sony Fs5’s for the guests and host and then a Sony X70 for the wide. Jeff Killian of Ocean Motion Productions road herd on the camera dept and drove the host camera during the stream.  They fed into a Tricaster provided by Take One Digital and pushed out to the world over a LAN connection and a bonded cell backup.  Great job by Matt Worley as our TD and Stream Tech. 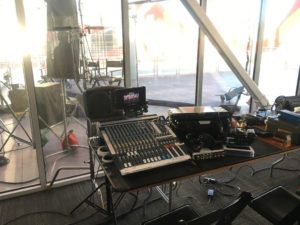 Sound was a bit of a challenge as the Petersen is right on Whilshire Blvd and had not one but two building construction projects going across the street in each direction.  John Franco was our A1 and worked some real magic keeping the background noise to a minimum.  He used a Dugan Automixer in the rig along with an Allen and Heath as the main desk. 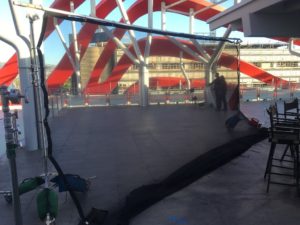 Stan Garber and Mike Bryant handled all of our G&E for the project and made it look effortless.  We were chasing the sun and trying to work in an interesting space to fit this all in.  We flew a single 20x diffusion behind the talent to slow down the buildings in the distance and help blur the background. 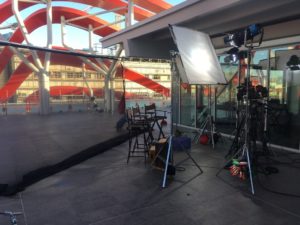 Key lighting was several HMI’s shooting through 4×4 diff with cups and bungees to quiet them down and backlight was a pair of 4×4 shiny boards fired in from the far corners of the shot.

All in all it was a great 2 days.  If you’d like to see the final product please check it out on Alfa Romeo’s channel on YouTube. It was a real pleasure working with everyone on the team and I hope to do it again real soon.  Oh… in case you were wondering what I was doing, I helped put the crew together here on the west coast and then ran cameras 1 and 2 during the shoot…