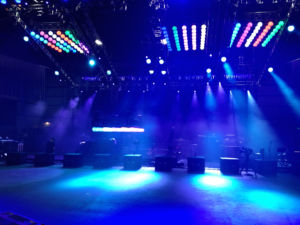 I recently had the opportunity to work with Fusion Productions at Sony Pictures Entertainment. I operated the B-CAMERA during an interview with Robert Scovill,  FOH engineer for Tom Petty and the Heartbreakers.  The band was finishing their rehearsal dates before heading out on their latest tour and Robert was kind enough to give us an hour of his time talking about the philosophy of “First In, Last Out”. FILO is a concept only too familiar to production and staging folks around the world.  Todd Elliott, owner of Fusion Productions, is using this interview as one of several pieces that will be played at the FILO conference happening this spring in Chicago. Todd has created the conference to give back to the production community and also bring together some of the best people in the industry to discuss the ins and outs of large scale production.

We shot on a pair of Canon C100 cameras and had a Sony Fs5 for the CYA.  I have to say I am getting more and more intrigued with these cameras.  I was born and raised Sony and have owned more than my fair share of them over the last 25 years.  But as the DP, Dave Hunter put it, “the Canon look just works”.  He lit the interview with 2 Diva 400’s double dipping each unit as back and key.  We placed a Sennheiser wireless LAV on each person and those went straight into the cameras A to A, B to B.  After the interview we took the C100’s around to the FOH position and shot some B-roll of Robert showing us the board layout and Mix position config – Very cool!!
The picture above is the full set under show lighting as we had it set during the interview.  On the tour there will be 4 large LED screens running upstage and to the sides of the stage for a 270 degree viewing arrangement.
I hope I get a chance to see the tour when it comes to California.  Until then I’ll just have to enjoy this picture =)
Until next time, good shooting and editing and grading,
TDTrey